Guest post: A story of two Davids and a Davide

This is a story of three events that occurred this month from our independent Australian publishers.

First is David Tenenbaum (Melbourne Books), whose Cold Chisel: Wild Colonial Boys book was due to be in stores last week. David had a print order with the Chinese printers for some 8000 copies due to the successful sell-in and emerging tour information, a new CD and the jacket imagery reflecting the group’s website.

You can imagine the energy in our business when we get such good sell-in figures and have the book acknowledged as going to be a major Father’s Day title. Our last book like this was the Jimmy Barnes Icons of Australian Music book, which sold and sold and sold.

What we did not plan on was to have the entire shipment pulped due to printing errors.

What this means in reality is the print cost, the shipping cost, the pre-press and (yes) our sales expense is virtually sunk money—not hurt money, because the whole project could have been terminated at that stage.

Now David does not have a head office, nor is he listed on any stock exchange. He is—like you [booksellers] and us—a privately owned business working in this (at times) perilous market. David had the guts to go again on the print run and told us of his decision and how important the success of the book was going to be on both our businesses.

To his credit, David then took the chance to actually enhance the publication with some more colour, some sharper images and a partial redesign of the back jacket. So, when the book arrives we will have a superior product and we hope an eager market place to take this book to the ultimate consumers. I have now seen one of the copies and am certain it will go into early reprint in time for Father’s Day. 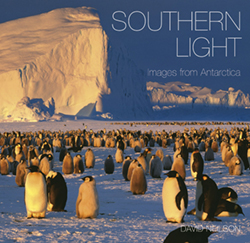 The second story involves David Neilson (Snowgum Press) and his book, Southern Light: Images from Antarctica. There was a gestation period whereby the book was ‘in play’ with a large publisher for many months. So, the build and anticipation to a book like this is actually years. The work is mammoth and bulky, weighing almost 3kg (the slipcased edition is 3.5kg).

David made his selection of printer in Singapore based on the search for quality and track record. The price of a publication like this should include all input costs. Well, this does not really happen. The hurt money includes the two weeks it took David to oversee and approve the printing and his signing off on every quality page.

When you only publish a book every five years, you have to make that book a statement, so I was excited when David told me that the book had made the port in Melbourne on Sunday and we would get the 14,000 kg of stock the following week; and David would be at our warehouse to witness the arrival and unpacking of the containers.

Now this where you start shake your head—for some reason, the book took up more than a full 20-foot shipping container but not enough to fill a 40 foot container, so there were extra charges: more money which does not get put into the actual costing of the book. Still, it was a nice chilly Melbourne morning (I don’t really like chilly Melbourne mornings) and the process started.

Now, David looked with stewardship at the air freighted copies and noticed one or two sections where the colour was slightly different to what he had sign off on. What happened next was that David physically inspected enough copies to guarantee that the stock we will ship are the ones that have escaped this colour change. You see: this book is $98.00 ($135.00 in the slipcased edition) and consumers need the highest quality the publisher can deliver.

So, the uncosted part of the book is difficult to assess, as the emotion that is part of the build up to these book monuments is so big and testing. At least, part way through the sorting, we got the news from publicist Alan Davidson that both the Sydney Morning Herald and The Age will be putting some major PR behind the book. And the Readings Monthly came out as an Age supplement this week.

Finally, I want to talk about the Davide Cali tour and the new title, 10 Little Insects. The publisher is Wilkins Farago and the owners are Andrew and Anna Wilkins.

I have known Andrew for going on 20 years, initially when he was at Hyland House and I was the street hustler for their books. Andrew, in case you don’t know, is a Frankfurt regular as well, either giving key note addresses or as a reporter for the media.

Davide’s works were discovered by Andrew some years ago and his translations are important to get his works into English markets. The penny drops with me when I realise the people who are funding the author tour are also the translators, tour promoter and publishers. All from a street in Albert Park in a house around the corner from The Avenue Bookstore.

In a true sense, you should not confuse innovation with entrepreneurship—well, I just did. What our publishers have given the Australian market is a world exclusive in the form of the first English translation—booksellers will only be able to buy the book from our business. The work is a big work, in colour and in graphic novel style.

Please share in the author tour and say yes when someone asks you for a Davide Cali authored book; chances are I know the publishers/entrepreneurs, translator, publicist and those people who will even pack the book.

I was going to write about how tough it was to collect money, but I chose to be excited instead with the people who trust and enjoy.