He was the author of two books: Grow Up! How to raise an adult by being one yourself (Wilkins Farago) and Teach Your Child to Spell (Hyland House), and a major contributor to the spoken word CD Back on Track.

John appeared regularly on national and regional radio and television, most notably as a weekly contributor for the Neil Mitchell program on Melbourne’s 3AW, and as an occasional expert commentator on Channel Seven’s ‘Today Tonight’ programme. 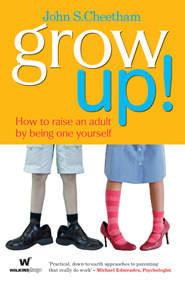